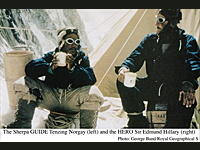 The Hero and The Guide
A true mentor understands that the audience is the hero, the ones responsible for saving their world from all sorts of bad outcomes or for reaching the top of some summit. You, the expert, you are just a humble guide, there to give them pointers and tools to succeed in their quest.

It’s just like the story of Tenzing Norgay, the Sherpa who accompanied Sir Edmund Hillary on the first summiting of Mt. Everest. Over a period of nearly twenty years, Norgay had made himself a part of every expedition that set out to put a man on the top of Mt. Everest. He had climbed as a lowly porter and as a respected member of the climbing team. He had accompanied large, confident armies on their way to the summit, but he had also gone to the mountain with a solitary climber. By 1953, he had probably spent more time on Mt. Everest than any other human being – and had come closer to its summit. And yet when the day came, and he was the Sherpa guide that led Hillary on that momentous climb, it was Hillary that received the accolades, Hillary that was declared the hero.

That’s right, you are NOT the hero! Not today anyway. You are the guides who has gone before and knows how to help others along on their journeys. Beware though, heroes aren’t really keen on being told what to do (remember your days as a hero…), rather they feel a camaraderie from sitting around the campfire hearing stories of the guide’s biggest challenges and how they were overcome. That’s right, as the guide, your best approach is to share your own experiences, how you struggled, or why you sought to try something different, the initial trial and error, and then finally, the success.

Think too about how much information is appropriate. Inexperienced speakers often feel like they need to throw every bit of expertise they have into a lecture to prove to the audience that they are indeed worthy of their attention, or in hopes that this way everyone will get something out of the lecture. The reality is that people hit overload when faced with too much to absorb and end up discarding everything. AND, you will not be the only guide this hero encounters! Since adults only tend to hang on to information that is useful to them at that particular moment, don’t worry about being too narrow with your topic. If that is what drew someone to attend your lecture, that is exactly what they want from you!

So next time you sit down to write or edit that talk, think about what tools you can offer your hero. It’s not about what you want to talk about, it’s about what your audience needs to succeed.